A short history of the Royal Preston Morris Dancers 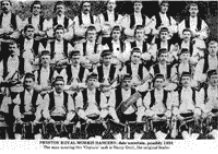 Preston Royal MD 1893
Preston Royal danced on the Lancashire Plain from around 1893 until perhaps 1901 although it is only certain the team definitely existed during 1893 and 1894. They are first documented performing in public at the Preston Rose Festival of 1893 but they may have been present at the opening of the Albert Dock in Preston in 1892 where they assumed the title "Royal".  After 1894 there is no mention of Preston Royal in reports of local events and they certainly did not dance in the Preston Guild celebrations of 1902.

Preston Royal 1992
Preston Royal Morris Dancers were reformed in January 1978 by Richard Boswell and Andy Anderson who were members of other North West Morris sides. This team was based on extensive work by Pruw Boswell and later published (see below).

The reformed Preston Royal Morris Dancers were as authentic as possible in terms of costume basing it on photographs of the original team and an old kit in the possession of a dancer's daughter. The only difference was the use of clogs rather than shoes.

The new Preston Royal performed dances from different towns and villages around the Preston area as opposed to just one or two unique to the original Preston Royal. Most of the dances were collected by Pruw Boswell and choreographed and arranged by Richard

Royal Lancashire MD 1978
In 1983, Richard Boswell and some of the dancers left Preston Royal to form a new team, Royal Lancashire Morris Dancers. The two teams danced independently for 16 years until in 1999 both teams found themselves short of members and decided to merge.

Royal Preston formal kit
Royal Preston Formal The new team from the merger of Preston Royal and Royal Lancashire had its first public appearance at the Great Northern Ceilidh in Preston on 25th March 2000 although this was still a mixed team with each dancer wearing his original team's costume.  The new team decided to call itself Royal Preston Morris Dancers as a compromise between the original names.

There was a need for a new kit which reflected both original team's identity. The costumes were similar in style but with different colours and headgear. The new costume is mainly based on the Preston Royal costume with a change of colour and with a "Royal Lancashire" cut. Royal Preston danced out it its new kit on 25th May 2000 for the BBC Music Live radio event.

Since then, Royal Preston have danced out at many local and national events and also in France.

Royal Preston new kit
In 2005, it was decided that the costume, whilst maintaining the authenticity of the original Preston Royal kit could be uncomfortable if worn for long periods, especially on hot days. Also it may appeal less to younger potential members. The original kit is now retained for "formal" events but a new simpler outfit is used for day to day team outings.

The team hopes to continue to perform dances collected from the Lancashire Plain in our local area and that people from around Preston and further afield continue to enjoy watching them. 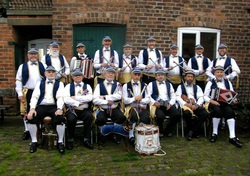 Royal Preston at the Three Dolphins in Longton. The first event in the new Guild kit of blue and yellow, Preston's colours.

This kit was designed for Preston Guild 2012.